I. The Concept of Film-covered Rubber Plug

II. Production and Application of Film-coated Rubber Plug at Home and Abroad

Because of the excellent chemical properties of the film-covered rubber plug, it has been widely used in many sensitive drugs, such as antibiotics and biochemical agents at home and abroad. In view of the wide application of film-covered rubber plugs, the chapter of medicinal rubber seals has been rewritten in the new edition of American Pharmacopoeia. It is specially stipulated that even if the plug with barrier film (such as fluorine film) is used, the part of the plug must meet the relevant requirements of the medicinal plug, mainly in order to control the quality of the plug itself. Therefore, the coating process is only a process of further optimizing the quality of qualified medicinal plugs to meet the higher requirements of sensitive drugs, rather than covering up the non-conformity of low-quality plugs. This also reflects the international recognition of plug film covering technology and fluorine film material, although at the same time, no fluorine film material for plug is applied for DMF and activated.

Ⅳ、Properties of Fluorine Film Material
1 Structure and Chemical Stability of Fluorine Films
The fluoroplastics film used for covering rubber plug contains tetrafluoroethylene polymer. Teflon is the product of replacing hydrogen atom in ethylene with fluorine atom. The monomer structure is shown in Fig. 1.

There are high bond energy carbon-fluorine bonds in its molecular structure. The substitution of fluorine atoms makes its molecule form a helical configuration. Fluorine atoms form a cylindrical shell, as shown in Figure 2.

Inert spiral perfluorinated shell makes fluoroplastics have a series of outstanding properties. It has excellent chemical stability and biological inertia. It can resist strong acid, alkali and various organic solvents, heat resistance, dielectric property, self-lubrication and aging resistance. Even at high temperature, aqua regia has no effect on it. See Table 2. At the same time, fluorine materials have very low surface free energy, only 0.019N/m, which is the smallest surface free energy among known solid materials, so almost all solid materials can not adhere to its surface, which is also one of the main reasons why it is widely used in food and drug production pipelines and containers.

The fluoroplastic film used for the film-covered rubber plug is not only stable to other substances and environment, but also does not use any processing aids in the film-forming process. Its fluorine-containing resin composition is 100%. 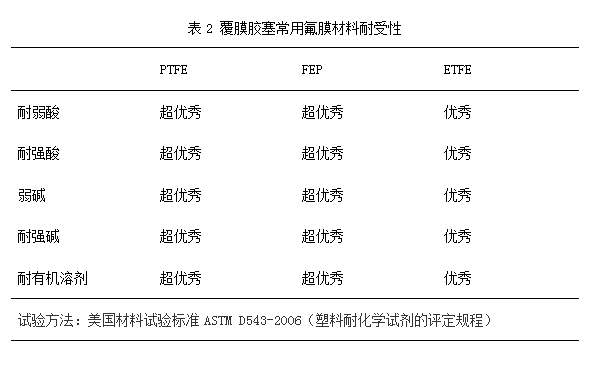 Ⅴ conclusion
In summary, the conclusions are as follows: (1) Fluoroplastics film used for film-covered rubber plug has high bond energy carbon-fluorine bond, fluorine atom substitution makes its molecule form a helical configuration, fluorine atom forms a cylindrical shell. Therefore, the film material of the film-covered rubber plug has strong stability, excellent chemical stability, heat resistance, dielectric property, self-lubrication and aging resistance, and is insoluble or swelled in any known solvent. (2) Film forming process does not require fillers, antioxidants, vulcanizates and other additives as rubber products, nor vulcanization reaction process, and its fluororesin composition is 100%. (3) The FEP film began to lose weight at about 400 C, and remained constant in the range of 121-300 C. No precipitates were found. The sterilization temperature of film-covered rubber stoppers used in pharmaceutical factories is generally 121 C, and the vulcanization temperature of film-covered rubber stoppers is generally 150-160 C. It shows that no weightlessness will occur in the production and use of film-covered rubber plugs. (4) The long-term service temperature of FEP (perfluoroethylene propylene) and ETFE (ethylene-tetrafluoroethylene) is 205 C and 165 C respectively. Therefore, the sterilization temperature of the rubber plug will not have any effect on the fluoroethylene rubber plug.

Review of safety concerns of fluoroplastics

Safety concerns caused by Teflon materials mainly focus on ammonium perfluorooctanate, an additive used in fluoroplastic resins. Perfluorooctanoic acid and its salts (i.e. perfluorooctanoic acid, PFOA) are one of the most difficult-to-degrade organic pollutants known. They have high bioaccumulation and multiple toxicities, which not only cause human respiratory problems, but also may lead to neonatal death. Global pollution has attracted much attention. In December 2002, the 34th Joint Meeting of Chemical Committees convened by OECD defined it as a substance that persists in the environment, has biological savings and is harmful to human beings.

PFOA is banned under the US Toxic Substances Control Act (US TSCA) because it can remain in humans for as little as four years and up to half a lifetime. DuPont has never reported that ammonium perfluorooctanate (C-8), a key raw material for manufacturing Teflon, may pose potential health hazards. Therefore, DuPont was accused by the US Environmental Protection Agency of violating the toxic substance reporting clause in 2004. The United States Environmental Protection Agency (EPA) launched the 2010-2015 PFOA Environment Program. Eight companies involved in the program, Dupont, Klein, Ciba Refining, 3M, Acoma, Dajin, Asahi and Solvey, agreed to reduce the emissions of perfluorooctanoic acid (PFOA) as well as its long-chain homologues and any other compounds that may decompose into PFOA. At the same time, it will further reduce the content of the above substances in the products.

Referring to the decision of the United States, the European Union issued the resolution of 2004/1935/EC directive on materials and substances in contact with food, and PFOA was also banned. On 27 December 2006, the European Parliament and the Council of Ministers jointly issued the Directive on Restricting the Sale and Use of Perfluorooctane Sulfonic Acid (PFOS), which limits the use and marketing of PFOS products. PFOS is not allowed to be sold as a constituent substance or element with a concentration or mass equal to or exceeding 0.005%. Restrict the use of PFOS in finished and semi-finished products. Products, semi-finished products and parts containing PFOS concentration or mass equal to or exceeding 0.1% (1000ppm) shall not be sold. The limitations include all products intentionally adding PFOS, including coated surfaces for specific parts and products, where textiles and coated materials are limited to 1μ g/m2.